Christmas is about much more than getting gifts. But I'm not gonna lie: getting gifts is part of what I love about Christmas. Remnants of little-kid excitement still surge through me when I sit in front of the Christmas tree and rip into my presents.
But this year I discovered something that's even more fun than getting a Kohls giftcard and argyle socks. And that's seeing Baby Brown Eyes' reactions to his presents. 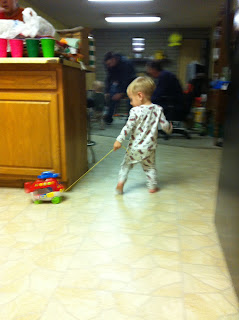 Maybe he was just imitating us, but every present was met with a little squeal of delight, even the clothes we got for him that I know he couldn't care less about. He handed his Cars 2 corvette back to me, insisting that I open it for him. And he snatched his tractor book out of my hands, flipped open the pages, and murmured low "oohs" and "whoas" over every picture.
As we expected, his favorite present was his ride-on truck: 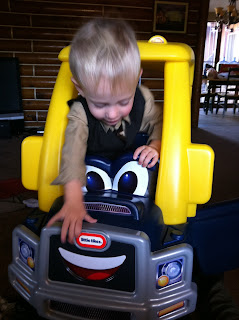 We covered it with a blanket and tried to hide it in the corner to give to him after all his other presents were opened, but he's too smart for us. He darted over to it, pulled off the blanket, opened the door and hopped in. Not a moment's pause to oogle or exclaim over it. He grabbed ahold of that steering wheel like he meant business. And refused to get out to open any of his other presents.

That was just the beginning.

The day after Christmas, he dragged me out of bed before the sun was fully up and led me straight to the living room, where his truck was waiting to be played with. I can't count how many rounds we made through the house, me pushing him and making car sounds while he laughed delightedly. When we left to go over to my parents' house, he reached for his truck and cried.

The next morning: same thing. And when we put Baby's shoes on and told him we were going to the store, he pushed his truck toward the door as if it was coming with us. We had to pry his little fingers from the steering wheel and lug him outside to the car while his cries and screams reverberated over the entire neighborhood. 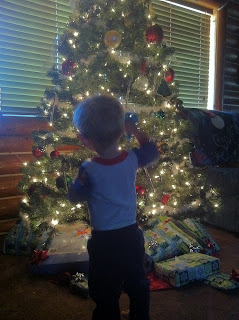 We found the perfect present for Baby Brown Eyes, all right.

I had no idea he'd love his truck this much.

Next year he's just getting clothes.
I love that boy,
The Brown-Eyed Girl
Posted by Rachel K at 10:38 AM