For years now Mr. Brown Eyes has talked about going out to fight wildfires over the summer.

He's gone out to a few small ones here and there, but every summer, it seems, the big ones escape him. Either we're on vacation or his department isn't sending out any crews or there aren't any big fires that need extra resources.

Which has been fine with me.

This summer, however, with the entire northwest blazing, I kind of knew Mr. Brown Eyes would get his chance. After a short stint on the Willow Fire in Lake Havasu City, he told me he was at the top of the list to get sent out again, this time to Idaho or Washington.

I tried to prepare myself. But seriously, how do you prepare yourself to be without your husband and best friend for two weeks?

Last Sunday, I excitedly welcomed Mr. Brown Eyes home from his forty-eight hour shift at the fire station. One minute we were snuggling in our bed, talking about the possibility of going to Cabo for the weekend, the next his phone was ringing and instead of getting ready for church, he was packing his equipment to go to Washington for two weeks.

And I was in tears.

A part of me wanted to pull the pregnancy card. He couldn't possibly leave me with the kids for two weeks while I'm so emotionally unstable. I knew all I had to do was say the word and he would stay. But I also knew how badly he wanted to go, how he planned for this for years. I couldn't keep him home just because I was too selfish to let him go.

So I let him go. And now we're counting down the days until he comes home.

Even though I feel like a part of me is missing, I have to admit, I like telling people where Mr. Brown Eyes is and what he's doing. I am so stinking proud of him. 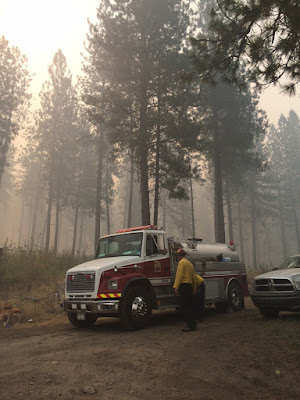 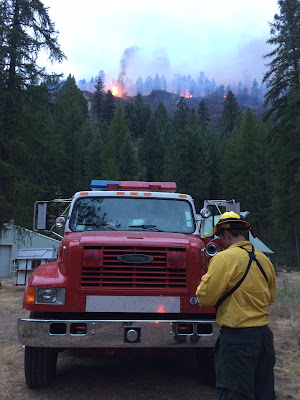 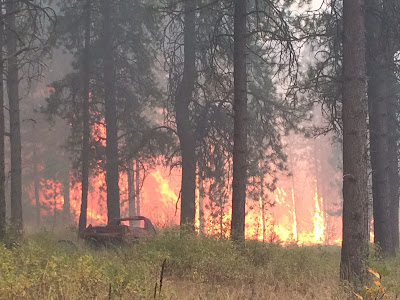 Meanwhile, we're trying to make these two weeks as fun as possible.
﻿ 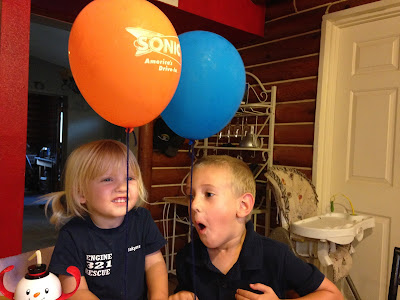 I mean, as much fun as two kids can have when their mother is 33 weeks pregnant and as big as a whale.
Only 500 million days to go,
The Brown-Eyed Girl﻿
Posted by Rachel K at 2:29 PM No comments:

I've been pretty nervous about being pregnant through the blazing Arizona summer. 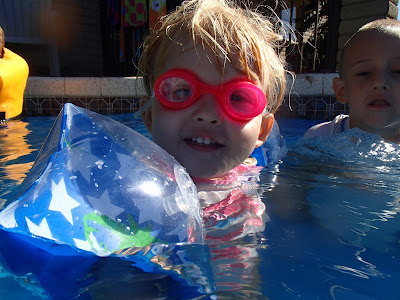 While I'm sitting in the cool AC in my house or at work, I think, "No problem. This summer's got nothing on me." 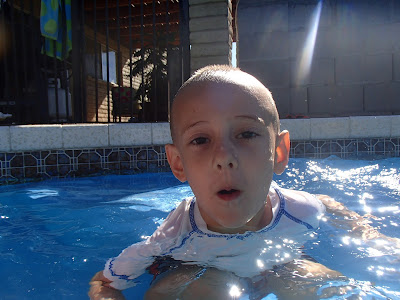 Then I step outside and instantly feel sweat dripping down every unspeakable part of my body, and I start yelling at my kids for every little thing as I buckle them into our oven of a car, and the only thing I want in the world is a bucket of ice water poured over my head...then it occurs to me that I'm pregnant and it's hot, and those two things may not be the best combination. 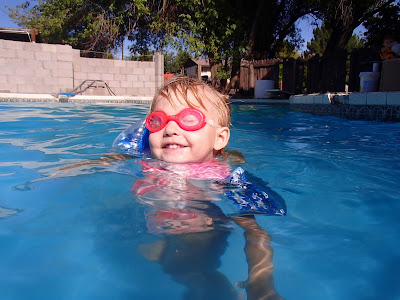 Which is why the kids and I had Sonic slushes for dinner the other night.

But as long as I have the AC and my parents' pool, I'm good. So good, in fact, that I've actually been noticing things that I kind of love about Arizona summers:

3. Cicadas buzzing in the trees

4. That deliciously cool feeling the second you jump into the pool

5. The low rumble of thunder in the distance

8. Watching my kids learn to swim 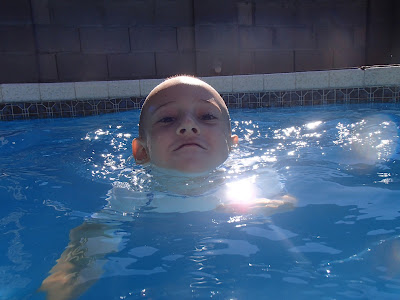 10. Flowers blooming on the only plants in my yard I've managed to keep alive

Happy Summer,
The Brown-Eyed Girl
Posted by Rachel K at 2:16 PM No comments: