How to Beat the Heat

This is how we survive our Arizona summers:﻿ 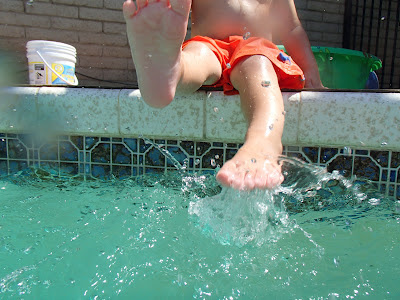 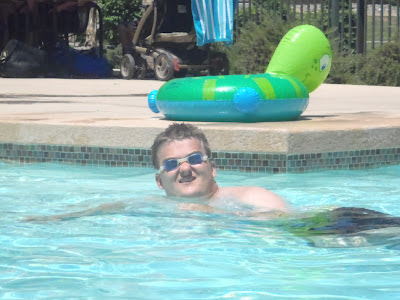 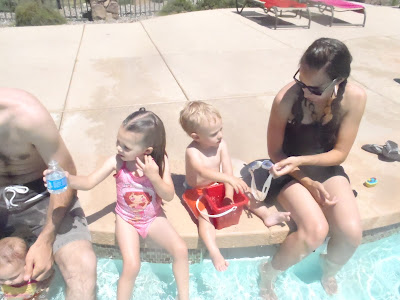 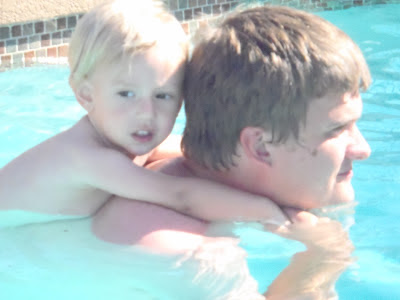 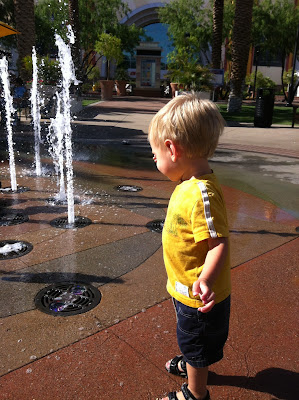 Lots and lots of water. 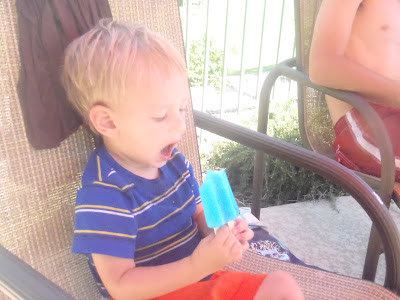 ﻿
Next month my little family will be exploring summer in other parts of the country. I will post lots of pictures. And stories of taking a cross-country road trip with a two year-old.

In theory, I am daring. I like adventure and trying new things. I'll do almost anything at least once, just to say I've done it, to put another notch on my belt of awesomeness.

In reality, in the face of speed and danger and other things that defy death, I pretty much just want to cry.

Every year when the State Fair rolls around, Mr. Brown Eyes practically has to get me to sign a contract, in blood, prior to leaving the house, that I will go on at least one scary ride with him. Otherwise I will take one look at those whipping, twirling, spinning, gyrating rides and decide I am going to spend the whole time sitting at a picnic table, eating gelato. And nothing Mr. Brown Eyes does can change my mind.

Even when he does manage to trick me into getting on a scary ride, I scream my head off the whole time and practically pee my pants.

Thus the reason why it's so important to him that I do it.

When Mr. Brown Eyes suggested going white water rafting last summer during our Oregon vacation, I immediately agreed. White water rafting is something I've always wanted to do. I never thought of it as being dangerous. I mean, you float down a river. And if you fall out, you get wet. Not a big deal.

Until the day arrived. And I started thinking harder about just what it was I was getting myself into. Sitting at the gas station, trying to calm my mind with thoughts that my overactive imagination was running away with me, my brother-in-law said to me, "I haven't been white water rafting in forever."

"Oh, yeah, it was a blast. I'm kind of nervous to go down the waterfall again, though."

I wish I could have seen my face right then. "Um, waterfall?"

"Yeah, you go down a waterfall. We went completely underwater. It was awesome."

Visions of careening over the edge of Niagara Falls flashed through my mind. I was officially no longer nervous about white water rafting. I was terrified.

I tried to put on a brave face, though. So my terror manifested itself in other ways--like a sudden, viciously-grumpy mood. I snapped at Mr. Brown Eyes over the dumbest things. I griped that I hadn't worn my bathing suit so I had to "go commando" underneath my wetsuit. A wetsuit with a gaping hole in the rear. After ten minutes of tugging and wiggling to get it on, I had to take it off and do it all over again, jam a too-small helmet onto my head, and dash into the bus before the driver decided to leave without me. ﻿
﻿As our guides carefully went over the correct way to get back onto the raft should we be unseated, I was sure this river was going to be the death of me.

Then we got on the water and crashed through our first rapids, the icy water practically swallowing me, and it was such a rush that my bad mood was instantly obliterated. The water, which had been snow just 6-8 hours earlier, was freezing cold but crystal clear and absolutely beautiful. We spun and twisted and tipped and flew through rapids with cool names like "Maytag," "The Granny Snatcher," and "Deadman's Corner," flanked on either side by towering cedars and firs and sheer cliffs. It was an amazing experience.

I did, however, opt out of the waterfall. I know, I know, I missed the coolest part of the whole experience. But I couldn't handle our guide's description of how it's possible to go under the water and get caught in the cycle of the falls, tumbling over and over until you drown. Then he told us it was a Class V waterfall.

"What do the ratings mean?" I asked him.

"Class VI would be Niagara Falls," he replied, camly dipping his paddle into the icy water. "Impossible to raft and survive."

Yep, that made up my mind right there.

I mean, look at the size of this thing:


I watched our raft disappear under the frothing water then pop back up and thought to myself, "I could have done that." I felt ridiculous for being so afraid.

But I'm a lily-livered weenie, remember?

Next time I won't let that silly waterfall get the best of me.

Maybe,
The Brown-Eyed Chicken
Posted by Rachel K at 11:57 AM No comments:

I just read this article.

All I have to say is, good luck, lady.

Just a few weeks of maternity leave, all of which you will be working?

I see two things happening. Either she will be conked on the head by the reality stick and realize that newborns don't allow you to do much besides nurse, change diapers, and snuggle, much less work as the CEO of a major corporation. Besides that, she will be so enamored with her new baby that she won't want to work.

But, more likely, she will keep her word by pawning her baby off on some kind of nanny, because being the CEO of Yahoo is much more important than motherhood. Higher paying, at least.

I understand that some women have no choice but to be working mothers. But it makes me sad to see women who think climbing the corporate ladder is so important they either don't have children at all, or they have children but push them aside.

Seriously, don't you think your own child deserves more from you than just a few weeks of maternity leave?

I know I should be so thrilled that women's rights have come so far that a pregnant woman was hired as CEO of Yahoo. But the old-fashioned part of me thinks a pregnant woman should be at home taking care of her family. Or at least willing to take sufficient maternity leave to care for her newborn baby.

Forget your job for a while. Enjoy being a mother.

Will this woman ever pause to gaze into her baby boy's eyes, push aside her work to hear him giggle and coo, throw out her arms to catch him after he takes his first wobbly steps?

Because that is way more important than being the CEO of anything.

Take it from me,
The Brown-Eyed Girl

The Stone Cut Without Hands

This past weekend, our church burned down.

I got a text telling me about it Friday morning and, unable to believe it, we turned on the TV. And saw this:

We drove by later that day and stared at the charred red brick, the yawning space where the roof over the chapel used to be, the lines of police tape criss-crossing the debris-scattered lawn.

It made my heart hurt to imagine tongues of fire consuming the beautiful paintings of the Savior, the font where I was baptized, the nursery where Brown-Eyed Boy plays, the chapel. This church has a place in some of my very first memories. But I didn't realize I was so attached to it until I saw it standing in ruins.

The amazing thing about The Church of Jesus Christ of Latter-day Saints? It moves forward. A burned-down church is an inconvenience, but nothing more. The Gospel of Jesus Christ cannot be reduced to ash and brick. It will continue to roll forth throughout the world, the stone cut without hands that cannot be destroyed.