My favorite thing about visiting my dad's hometown in the Upper Peninsula of Michigan?
Places like this: 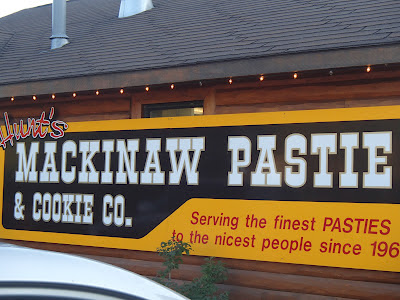 I don't know the history of the delectable, hand-held meat pastry known as a pastie (pronounced PASS-TEE), other than miners like my grandpa used to take them in their lunches. All I know is my mom got the recipe from my dad's mother, and she's been making them (on special occasions) for my whole life, and the UP is the only place I have ever been where you can find a little pastie shop and sit down and enjoy one without all the work of making them.
It's a glorious thing, and even though I was seven weeks pregnant and nauseous out of my mind last summer when we were there, I stuffed my face with as many pasties as I could get my hands on.
I have to admit, though, they are best homemade, and the work it takes to make them is definitely worth it. So because I love you, I am sharing my mom's (or I guess you could say, my grandma's) pastie recipe with you. 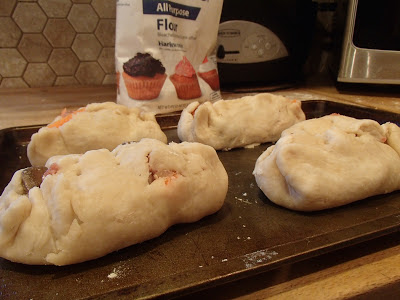 PASTIES
For the crust:
3 c flour
1 tsp salt
3/4 c oil
1/2 c water
Mix and set aside until the filling is done.
For the filling:
3/4 lb ground beef (broken up)
3/4 lb ground turkey (broken up)
2 med onions (minced)
3 carrots (grated or chopped small)
5 med potatoes (minced)
1/2 med rutabaga (grated) - you can also use a turnip
1 tsp celery salt
Mix vegetables with 2 tsp salt, a little pepper, celery salt, and meat in a large bowl.
Divide dough into 6 equal portions. Roll to size of medium pie plate on lightly floured board. According to my mom, my grandma was actually able to roll the dough until it was paper thin. I'm not that talented. But you do want it as thin as possible.
Place 1/6 of filling on 1/2 of pastry. Draw the other half of pastry over filling and crimp or twist edges to seal filling. Prick with fork. Bake in 375-400 degree oven for one hour. 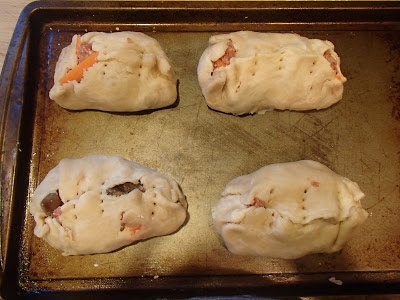 These are delicious smothered with gravy or your choice of condiment. I love them best straight up. 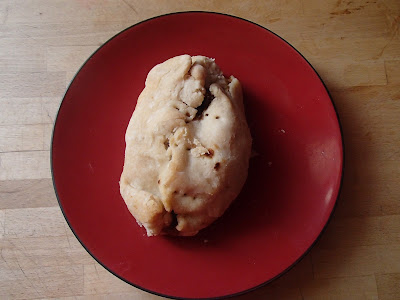 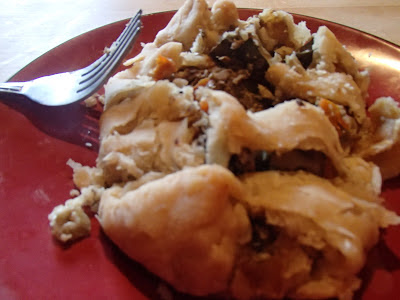 You can get creative and fill these suckers with pretty much whatever floats your boat.
As a side note, the last time I made pasties, I put half all-purpose and half whole-wheat flour in the crust. Very much against tradition. My grandmother was probably rolling in her grave.
But they sure tasted good.
Suddenly very hungry,
The Brown-Eyed Girl

One of Those Days

Some days I feel like I will never be a good mother.

I am constantly after Brown-Eyed Boy for being too rough with his sister and my patience, which is short to begin with, swiftly wears down to nothing. I am overly harsh when Brown-Eyed Boy doesn't want to sit on the self-flushing toilet at the store. Family Home Evening turns into little more than a desperate attempt to teach Brown-Eyed Boy something about the gospel in between his demands for a popsicle. Baby Blue Eyes falls off the changing table. She is unhurt, but screaming her head off.

For a moment the three of us sit on Brown-Eyed Boy's bed, crying.

Some days I just don't feel like I can do it. I feel like my children are going to grow up completely messed up, or, at the very least, hating my guts.

Some days I berate myself with the words, "You are a horrible mother."

Being a mother is hard, and Satan works even harder to discourage mothers at every chance he can get.

The reason why hit me one day while Baby Blue Eyes was sleeping in my arms. I realized that Satan will never have this. He will never have a body, or a family, or perfect moments when he looks down into his sleeping daughter's beautiful face and realizes he has everything--everything.

No wonder he is battling so fiercely against the family. He must be really, truly miserable.

But thankfully we have the Lord's help in being mothers, in overcoming Satan's lies, in everything we do.

One difficult afternoon, while the boys were playing outside and the baby was sleeping, I knelt down beside my bed and asked the Lord for help. The only sound was the buzzing of bugs outside. It was so quiet, so still, I could literally feel Heavenly Father bending His ear to listen to me as soon as I said His name.

Isn't it amazing that the God of the whole universe loves us enough to listen to our prayers?

Dieter F. Uchtdorf, second counselor in the First Presidency of The Church of Jesus Christ of Latter-day Saints, taught:

"[T]he most powerful Being in the universe is the Father of your spirit. He knows you. He loves you with a perfect love.

God sees you not only as a mortal being on a small planet who lives for a brief season—He sees you as His child. He sees you as the being you are capable and designed to become. He wants you to know that you matter to Him."
Find the rest of President Uchtdorf's message here.
We matter to Him. He is aware of us, even on those messy, frustrating, off-center days when we feel lousy at everything we do.
Especially on those days.
Love,
The Brown-Eyed Girl
Posted by Rachel K at 1:54 PM No comments: