I was going to post something a little more on the somber side today, but after being told multiple times that my last post was a tear-jerker, I decided to save it for another day. Instead, I will make you smile by showing you the many faces of Baby Brown Eyes.
First up: 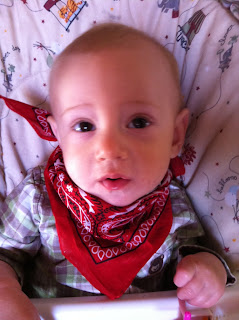 ﻿
Cowboy Baby. The rootinest, tootinest baby in the wild, wild west. (And the drooly-est, too. He drooled so much on his red bandana that it turned his shirt pink.)
Second: 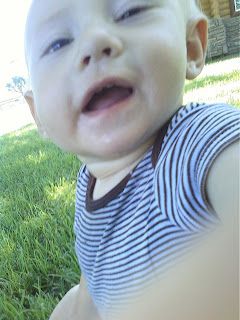 Attack Baby. I had something he couldn't have. So he wanted it. 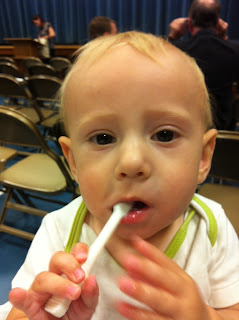 ﻿
Brushing his six teeth.
Fourth, sigh, and one of my all-time favorites: 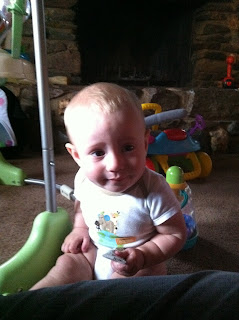 Making a poo.
I'm so sorry, Baby Brown Eyes. I know someday this picture will become a bitter source of embarrassment for you, especially when your father and I show it to your future girlfriends. But you should take pride in the fact that you are adorable, even when you're pooping. ﻿
On the flipside:
﻿ 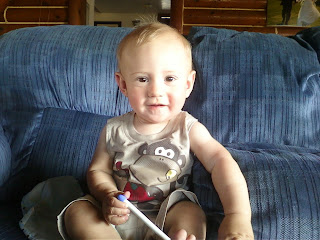 Here he is as his incredibly handsome self. Look at those eyes. So many girls are going to lose themselves in those eyes. Then we'll show them his pooping picture and they will realize that he is a mere mortal, after all.
And finally, here he is with his cousin: 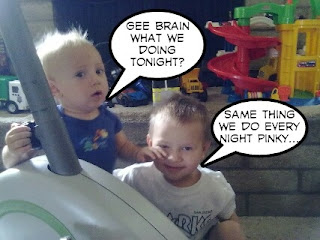 Plotting to take over the world.

Someday they just might,
The Brown-Eyed Girl﻿
Posted by Rachel K at 9:32 AM