One year ago, we bought six little chicks for the kids. 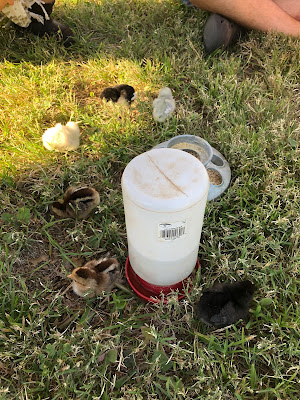 We lost one to a mean dog.

Another one grew up to be a big, mean rooster who delighted in attacking me and the kids, so we had to get rid of him.

The remaining four have been very prolific (with a little help from our incubator), and as of a week ago, they had increased their numbers to eleven. One of our hens, lovingly named Fatso, hatched her first chicks without the aid of the incubator and officially became a mama.

She started with one chick, then three, then six. There are now officially eight, though I can't seem to get a picture of all of them at one time. 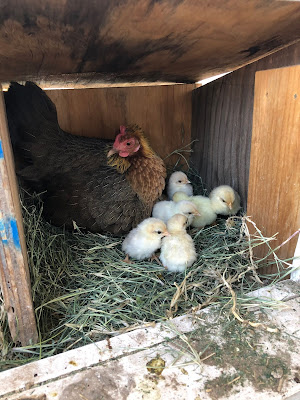 She is such a devoted mama. I could stand there all day, watching her tuck her little babies under her wings, clucking lovingly at each one.
Her mothering instincts amaze me. Her dedication to doing nothing but sitting on those eggs for three weeks, the way she's given up her days of roaming free through the yard to be cooped up with eight hyperactive, adorably obnoxious chicks. All to be a mama. As she settles into her nest, little cheeping balls of fluff scrambling all over her, pushing under her, jumping onto her back, I can almost hear her thinking, "What did I get myself into?"

It was the same thought I had when I brought my first child into the world.

Thank goodness there weren't eight of him!

Hang in there, mama. It's so worth it.