I have never been a dog person.

Growing up, we always had cats. They basked in the sunshine outside our front door and curled around our ankles when we walked outside. In the spring, there was always at least one litter of brand new kittens to name and snuggle and love.

We had a few dogs growing up, one that died on my birthday and another that followed me to school and then escaped our yard again never to return. My brother's dog was a mean Keeshond who chased all my friends away.

So, you see, I've never had much luck with dogs.

When Mr. Brown Eyes first talked about getting a dog, we got a horse instead. Then talk turned to getting a puppy, which sounded like way too much work when we had our own human babies to take care of. But now and then the topic continued to come up.
I conceded that I wanted a dog that would 1) live outdoors 2) scare unwanted strangers away and 3) go running with me. Mr. Brown Eyes wanted a dog to kill gophers. The kids just wanted a dog.
Ohana does not live outside, she usually plays with the gophers instead of killing them, and she occasionally rolls in roadkill. Otherwise, she is perfect.
She puts up with all the kids' shenanigans. And trust me, there are a lot of them.
Such as,
Ohana the Reindeer: 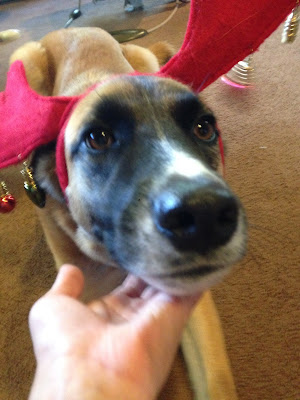 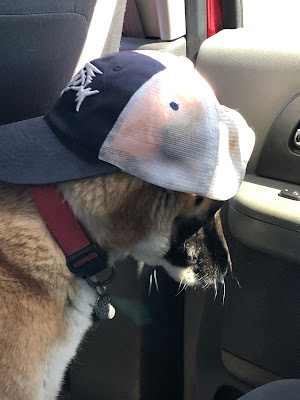 And let's not forget when the youngest Brown Eyed Girl went through her phase of never being able to go to the bathroom by herself. Lucky Ohana got to sit in the bathroom with her every time.
Ohana is also a practically tireless running companion and she loves to come camping with us. 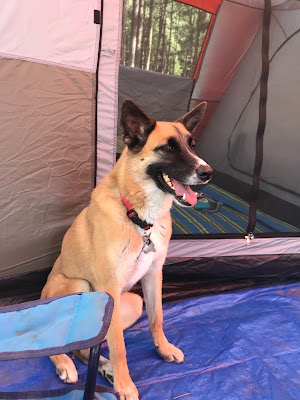 She dreams of catching a deer. Or at least a squirrel.
Oh, and she thinks all the babies are her puppies. 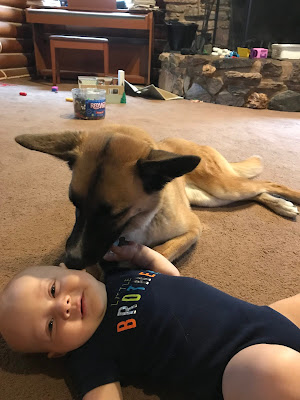 The only one who doesn't love Ohana is the cat.
One afternoon Ohana rode in the car with us to pick the kids up from school. On the way home, she was enjoying sitting on top of my son's backpack, sticking her head out the window. My son decided he wanted his backpack, and as he tried to pull it out from under her, I suddenly heard a cry from the back of the car.
"Mom! Ohana jumped out the window!"
In my disbelief I glanced in the rearview mirror and there she was, standing bewildered in the middle of the road.
I muttered a few choice words as I pulled the car onto a side street and leapt out onto the sidewalk, running full-tilt. As I ran I panicked, worrying that Ohana had been hit by a car or had run off and that we might never see her again.
I can still remember the relief that flooded through me the moment I spotted her through the bushes, surrounded by some good Samaritans trying to find who she belonged to. And I knew the moment she saw me because her whole body shook with joy. She bolted down the sidewalk and hurled herself into my waiting arms.
"Oh," the good Samaritans said. "She's obviously your dog."
It was then that I kind of understood the whole dog-person thing. It's kind of amazing to find an animal that can love so much. 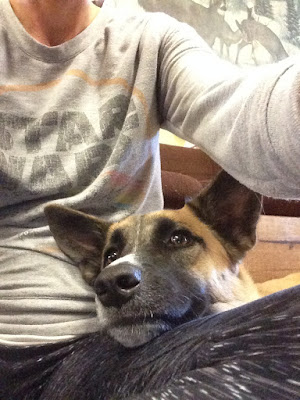 Even after you just accidently abandoned her in the middle of the road.
Ohana is part of our family. She proved it last summer when, all on her own, she joined our family pictures. 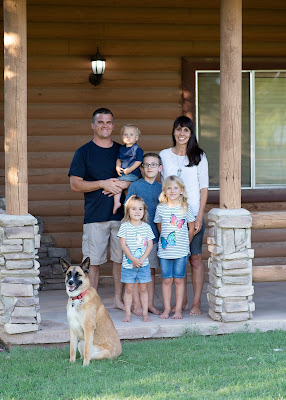 No wonder the cat doesn't like her.
I'm still not sure I can say I'm a dog-person, but I'm definitely an our dog-person.

Still can't handle that dog breath, though,
The Brown-Eyed Girl