I have been to exactly six proms in my lifetime.

1. The first was high school prom. My date was twenty-six years old, the older brother of one of my good friends. He was that huge crush that lasts through high school, the one whose picture I took to college with me and swore no guy I ever met would ever compare. I used to dream that we would span the distance between our ages and live happily ever after. For him the date was probably just a way of humoring me, doing a favor for the friend of his kid brother. But for me the date was magical, a dream come true, one of those nights that make you think, as a teenager, that life doesn't get any better.

Until I saw our pictures.

He told me not to chew my gum.

For the record, that crush lasted on and off through my sophomore year of college when, suddenly, I grew up.

2. Prom #2 was the first of the adult stake proms my church puts on every year. I wore my dress from high school. My blind date was a returned missionary--so fresh off his mission that he was still weird around girls. We danced a couple times, then spent the rest of the night avoiding each other.

3. Prom #3 was another blind date. This time he was fun and engaging and very comfortable around girls. As soon as we walked into the dance he grabbed my hand as if we were a couple. Hand-holding might not mean much for some people but for me it was a sign of serious commitment. I wasn't commited, though. I wasn't even interested in him beyond friends. But I went along with it. He obviously got the wrong idea, and tried to kiss me when the night was over. Of course, in his defense, I didn't give him any reason to think I didn't want him to kiss me.

That's the kind of a girl I was back then. Just a tease.

I turned my head away at just the right moment.

It wasn't such an obvious kiss attempt that he couldn't play it off as if it didn't happen.

We parted as friends.

Until the second date, when he tried to kiss me again in the dim glow of the porchlight outside my front door, and being a tease just wasn't working for me anymore.

"I keep trying to kiss you," he said, "but you keep turning your head away."

Brutal honesty. It's what most relationships are lacking.

We didn't part as friends that night.

4. My fourth prom I finally got the perfect date. He was my husband of a whole month and a half. We were ooshy-gooshy newlyweds, dancing so close to each other we might as well have been superglued together. The only thing he remembers about the night was that the Mexican restaurant we ate at beforehand made him sick and he spent most of the dance in the bathroom.

5. I attended my fifth prom stag because Mr. Brown Eyes had to work. I wore elbow-length gloves and some girl thought she'd tell me I wasn't wearing them properly.

6. Prom #6 was the very best. We made a group date out of it, but somehow, even in that big room crowded with people, Mr. Brown Eyes and I had eyes only for each other. It's the greatest thing in the world to be married to your best friend. One minute you're looking into each other's eyes, melting with romance, the next you're busting up with laughter over some dorky dance one of you invented.

Which is as it should be. 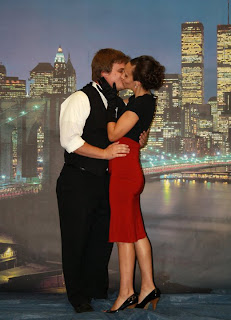 I insisted on kissing pictures so my braces didn't show.

As you can see, my teasing days are over.

Which is also as it should be,
The Brown-Eyed Girl
Posted by Rachel K at 11:52 AM