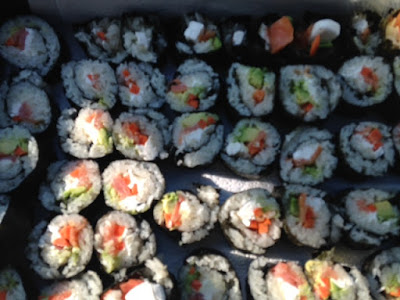 Not authentic sushi, of course, but still delicious.
And this was the first time I made California Rolls (almost) entirely by myself, so I was pretty proud.
Happy Father's Day, Mr. Brown Eyes. I love you (and your love of sushi).
California Roll Queen,
The Brown-Eyed Girl
﻿
Posted by Rachel K at 10:51 AM

Sounds like Scott... his number 1 choice for going out to eat will always be sushi!! I have to learn to make it, then Scott would be super excited. :)

That's funny! I never pictured Scott as a sushi person.