We had some rough times while I was growing up. I was a stubborn teenager and you were hard on me.

When your Italian temper flared, I swore I would never be like you.

Last week Brown-Eyed Boy had a dentist appointment at a pediatric dentist's office that we had been referred to by his regular dentist. Because his regular dentist's office failed to do their job, the appointment did not go like it was supposed to. Instead of getting fillings, Brown-Eyed Boy had to have another exam and we discovered he had three cavities instead of two, which meant shelling out lots more money than I anticipated.

And the whole time I was a barely-controlled ball of rage, snapping at the hygienist, rolling my eyes, crossing my arms and assuming an angry stance that just dared anyone to try to talk to me and risk inflicting my wrath.

Just like Dad used to do when I was a kid. Man, I hated going to the store with him.

Yes, Dad, turns out I'm more like you than I ever thought. I have that same Italian temper. I don't like having any other cars in front of me on the highway. I freeze when the temperature drops below seventy-five. I pinch the life out of pennies and I wouldn't mind jumping into the car and taking a road trip to see the world.

And now that I'm older, I've seen sides of you I didn't know existed when I was a teenager. You tearing up at your surprise birthday party. Hearing your uncles call you "Jimmy." Seeing you throw your arms around my son. 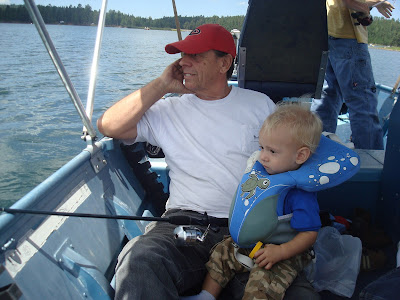 Love,
The Brown-Eyed Girl
Posted by Rachel K at 2:57 PM