The summer before I graduated from college, I wanted to do something different. Something besides lounging around my parents' pool, working on my tan. I'm not sure why. A summer spent lounging around the pool sounds pretty good to me right now.

I guess it was because my roommate had told me all about the ranch she had worked on the previous summer, all the cowboys she had met and the fun she had had. A summer full of horses and cowboys was right up my alley. With divine help, I found this place called Ensign Ranch that was looking to hire a couple wranglers for its summer season. I immediately applied and got the job.

A few months later I was on a plane to Seattle, my head full of visions of the handsome cowboy who would steal my heart somewhere between the long, leisurely horseback rides and the late nights roasting marshmallows around a crackling bonfire. I was sure I was headed toward a summer that would change my life forever. Romantically, I hoped.

But when my parents dropped me off at the quiet ranch just outside of the tiny town of Cle Elum ("Easy Thru Access," the signs boasted), what I discovered was not what I expected. 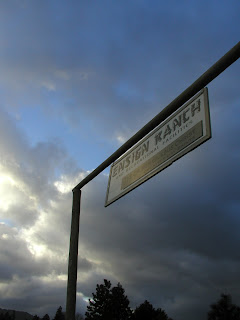 There were no cowboys in sight. Well, unless you count the soft-spoken ranch manager who was old enough to be my father. Ensign Ranch is owned by The Church of Jesus Christ of Latter-day Saints, and most of its staff consists of missionaries, both older couples and nineteen to twenty-one year-old young men. There were five (later six) young missionaries working at the ranch that summer. Five hard-working young men who had dedicated two years of their lives to serving the Lord. Five young men who were were strictly off-limits.

My parents and I were ushered into the dining room where I had my first taste of our cook's amazing food. But I moped over my plate. When my parents left, I lugged my stuff up the stairs to my little apartment above the front office and sighed deeply, disappointed that my dreams of a summer romance had been shattered so quickly.

I didn't have long to feel sorry for myself. A couple of the missionaries came knocking on my door, asking if I was ready to go meet the horses. A few minutes later we walked between rolling green pastures to the barn, and it didn't take me long to realize that the friendships I was going to make while working in this beautiful place would surely make up for any lack of romance.

With that realization, I dove right into work. The ranch became my refuge from the world, even when I was trudging through sloppy mud trying to catch elusive horses or cleaning up after messy teenage girls in the bathrooms. The only day I actually stood in front of a mirror and did my makeup was Sunday. Most of the time my hands were covered in dirt and scrapes. And I couldn't have been happier.

My dream of summer romance still lingered at the edge of my mind, though, and the lack of available men at the ranch made me a little boy crazy. I found potential love interests wherever I could, from the returned missionary from Russia who asked for my phone number and never called me, to the Schwan's ice cream man making his weekly rounds, to ranch guests who came on our trail rides. My future husband could be anywhere, I reasoned with myself. I had to keep my eyes open for him.

It was during a trail ride one hot Saturday morning that a particularly tall, handsome young man caught my eye. Later that afternoon, when my fellow wrangler and I were working at the Trading Post down by the lake, renting canoes, I had the blessed luck of seeing him again. As he and his group put on their life jackets and got ready to go out onto the lake, he returned to the window and asked for a place to keep his money.

I smiled, cranking up my powers of flirtation. "If you trust me," I said sweetly, "I can hold it for you."

He readily agreed and handed me a wad of cash, which I tucked away into a safe place, batting my eyelashes the entire time. He started to walk away, then turned back. "Oh, can I get a wristband?"

My lips started to hurt from smiling so much. "Sure."

"Actually, make that two, one for me and one for my wife."

My smile disappeared, my heart sinking like a rock in the lake. My sweet tone lowered into a grumble as I replied, "Okay." I handed him his wristbands and he walked away with a tall, frizzy-haired girl that I now knew was his wife.

It took about 3.5 seconds for my disappointment to subside, but I fumed all afternoon that he hadn't even had the decency to wear a wedding ring so love-starved girls like me, marooned on a ranch all summer with only horses and missionaries for company, would know he was off-limits and not waste their time flirting with him. By the time he and his wife returned from their canoe trip, I was feeling feisty and just a little mean.

When he came back to the Trading Post window and asked for his money, I looked him straight in the eye and asked, "What money?"

You should have seen the look of panic on his face.

It made all the wasted flirting worthwhile.