It's time I write about another man in my life. 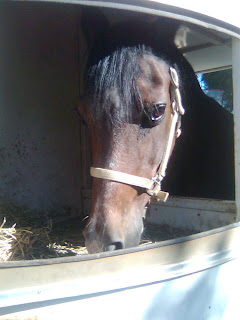 Yes, he's a horse. But not just any horse. He was a gift from my parents for my thirteenth birthday. I'd cried and pleaded and prayed for a horse my whole life up until then. Honestly, I can't say what made my dad finally buckle and buy one for me. He's such a penny-pincher that pennies everywhere are afraid of him.
Whatever it was, a few months after my thirteenth birthday we trailered home a beautiful bay Arabian gelding. I introduced him to his pasture, fed him carrots, and named him Sultan.

I got Sultan at that awkward time in my life when I was transitioning from a child into a teenager, when I hated my nose, wanted nothing more than to be popular, and thought that Titanic was the greatest movie in the world. As I learned to ride, Sultan became my refuge from all the agonies of growing up. Everyday after school we went for long rides down tree-lined trails, galloped through dusty farmer's fields, and explored roads I had never traveled on foot. During many nights of adolescent heartbreak I would throw my arms around his neck and let my tears soak his fur. He was my best friend, there for me when I felt like I had no friends at all.

Although changed, my relationship with Sultan has lasted through the years--through a sad goodbye when I left for college, through me getting married and moving into a small apartment, through the birth of my first child. Once Mr. Brown Eyes and I bought our first house, Sultan came to live in our lush green pasture, and once again he and I were riding down farm roads and into the mountains, our new home full of new places to explore. Even pregnancy didn't stop me from riding. I  knew Sultan so well I completely trusted him with me and my unborn baby.

Over the summer Mr. Brown Eyes and I decided our pasture was too big for one horse, so we bought a horse for Mr. Brown Eyes. She was a tall chestnut American Saddlebred we named Harley, only four years old. Friends and family came over to see her and gushed over how pretty she was. Then they looked and Sultan and smiled. "Oh, he's so sweet! And old!"

Old? Since he'd entered his twenties I knew Sultan was past his prime, but no one ever believed me when I told them how old he was, he was so spirited and energetic. He was always the horse people gushed over, as shiny as a brand new penny, his head held high as he pranced and cantered through the pasture, showing off.

But suddenly...he looks his age. Instead of cavorting through the pasture he ambles slowly, hanging his head. His brown coat isn't quite as shiny. His hip bones are more prominent because it's harder to keep weight on him these days.

Sultan is old. Next to Harley's youthful vigor I've been forced to admit it. And it breaks my heart to think that the friend who was there for me all through my teenage years won't be around forever. But even though we're not riding into the sunset together every day, there are still plenty of adventures left for us to enjoy. 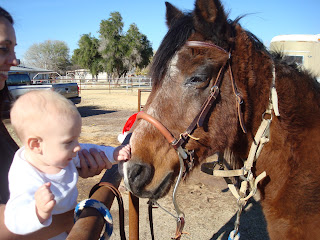 They're best buds already,
The Brown-Eyed Girl﻿
Posted by Rachel K at 3:59 PM