We arrived at the Easter party and the first thing my kids wanted to do was play on the playground.

I could have kept them blissfully ignorant. I suppose I didn't really want to.

"Hey," I said to Brown-Eyed Boy. "Do you want to see some baby ducks?"

He snapped to attention on his swing. "Yes!"

Baby Blue Eyes, of course, wanted to come along because she wants to do everything her brother does.

So I led them to the little cage where my friend had housed two tiny ducklings, both still fluffy with yellow and black down. A crowd of other kids were already ogling them, trying to pick them up and squeezing them too hard. My children joined the crowd, fascinated.

But I think, deep down in my five year-old heart, I wanted those ducklings just as badly as Brown-Eyed Boy did.

And even though I've spent the last three days cleaning up duck poop and transferring the ducklings from my bathtub to their outside cage and back into the bathtub, nothing beats the way it felt to drive home from that party, Brown-Eyed Boy clutching a peeping box of ducklings on his lap, telling me over and over, "I'm so glad I won the ducks, Mommy." 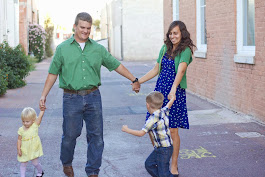